A Game About Dressing Up Cats As Historical Characters 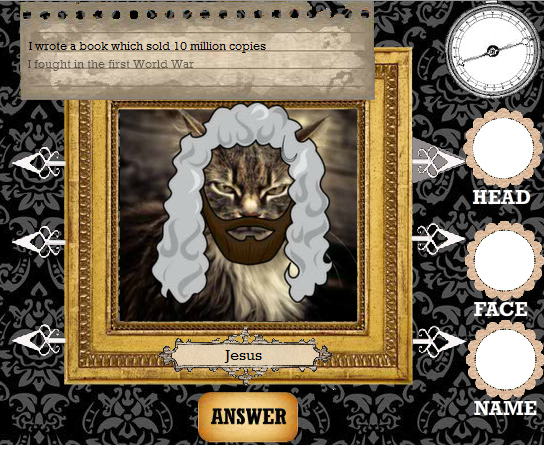 As a hobby project, I learned a lot during the making of this game. Here are some of the lessons learned:

All the small bits take a long time

I knew I wanted to make another flash game after finishing my last one, None More Black. I started work on this game in August 2012, and within a few hours had all the key components (the code which handled the questions, and dressing up the cat). At this point, the game looked like this:

These were the fun bits to make. As you may have noticed it took a few years to do all the small extra things that make it a game (menus, sounds, scoring logic, animations). However last year, I decided…

It’s better to ship something imperfect than never ship.

I had lots more grand plans for this game, including many ‘nice to have’ features. As the game is about making cats look silly, some sort of sandbox mode, with a “post image to twitter” functionality would have helped it get out there. Also I would have liked more cats to dress up (currently there’s only one), and even convinced my own cat to pose in a suitable position (as is visible on the about page of the game). However I wasn’t committing the time to the game required to get these features implemented any time soon.

After reviewing how the game’s production had stalled during 2012, at the end of last year, I decided to define the Minimum Viable Product – the least I have to have to get the game out there. This has been the plan ever since, and is the reason the game is out now.

I claim no artistic ability, which is very restrictive when making a game. Being handy with photoshop, and using free-to-use images can get you quite far, but the game could definitely use more custom artwork.

I ended up paying for an artist to do the beards and hats for the cats, since it’s integral to the design of the game – however since this was a hobby, I didn’t feel I could justify the expense of getting a professional to do extra art work. This means elements of the visual design have suffered, due to being made by me. This is particularly evident in the main menu. I wanted to portray an art gallery of famous pictures with cats added, and a prototype of this was made, however it looked rubbish. In the end, the paintings and curtains seemed the easiest way to portray this idea, while staying within my ability.

In None More Black, the only statistics I had access to was the high-scores table. However this only saved high scores when the player was logged in, which it became apparent wasn’t often the case. With this game I’ve integrated google analytics (using the GAForFlash API), and have got much more insight into how people are playing the game. From the first day, it’s told me:

These findings will be useful for updates to this game, or whatever game I make next. I have a few ideas about what hobby game I’d like to make next, but based on this game, it won’t be ready until 2018 at the earliest. So don’t hold your breath.