This week our HCI course featured an introduction to starting the design process by evaluating existing technologies, and the key advantages of this were made apparent when we started to build paper prototypes.

In an abstract sense, the advantages of evaluating existing technology is that aids redesign – you can see what elements turned out successful, and which did not. What this means in practise is that you can steal the best bits of the competition, and fix the bits that users complain about (and hence find raw user experience data on the internet). This is particularly pertinent with this week’s release of Windows 7.

Aside from multitouch (surely useless for most home users), two of the main ‘new’ features of Windows 7 are likely to be the result of evaluating existing technologies – mainly OSX.

The task bar now has persistent icons, so they don’t go away when you close the program. Programs that are closed have a slightly different visual effect applied to them on the task bar. OSX users will of course remember this from their own Dock.

Or is it this one?

Another borrowed feature is the new way show desktop works on Windows Seven. Hover over the bottom right hand corner of the screen, and it will look like this: 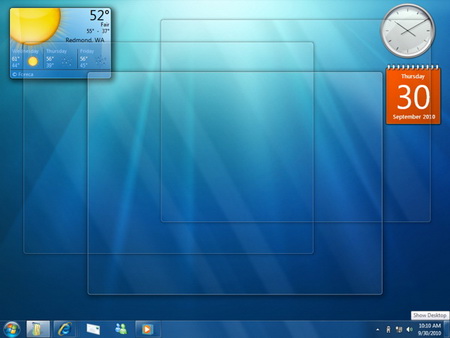 As OSX users will know, this is the same as leopards’ exposé feature, which allows users to show all open windows, all application windows, or (as in windows 7) the desktop, by moving the mouse into the corner of the screen. When I used to work on Mac’s, I thought this was a great feature, and its no surprise why Microsoft borrowed it.

Both of these are examples of taking ideas that were either popular or productive, from a rival operating system, and integrating them into your own design.

Also this week is the launch of the first Microsoft Store. Again, they evaluated the existing user experience of an Apple store (sleek design, answers bar, the layout) and… nicked it. Great success!

This isn’t just Microsoft bashing by the way, its just relevant examples of evaluating existing ideas, and taking the good bits. Everyone knows that Apple nicked all its ideas from Xerox anyhow!

So, in the spirit of ‘evaluating existing ideas’, we have been involved in the design of a new system for the University. User Experience will be important here, for the feature we are designing is likely to be used by students in high stress situations. We had half an hour to paper prototype some ideas on how to build the system (which it quickly become apparent was not enough time). Then we swapped, and compared our own designs to those produced by other groups. My personal favourite design (by Hassan and James ) had emulated key features from eBay, particularly how they categorised entries by the status (i.e. on eBay, ‘items being bid for’, ‘items I’m watching’, ‘items sold’ appear on separate lists).

and evaluating existing designs had not only helped our group find a better solution than the one we’d implemented, but also had been a key part of James and Hassan’s design process.

My ‘design gripe’ this week was my DVD player. It has many problems, a few of which I’ll share here.

From this, we can deduce the following points: 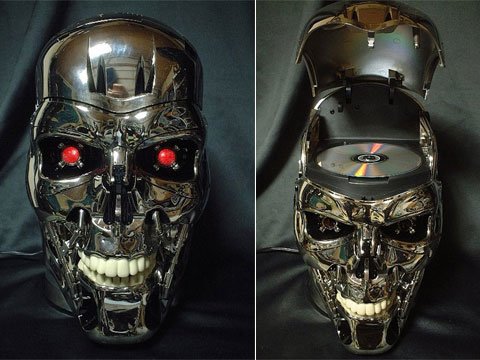 my next dvd player

I’ve started reading Alan Cooper’s The Inmates are Running the Asylum, which diagnoses the problems with technology currently as a lack of understanding by the business of the need to separate programmers and designers. Programmers are great at thinking logically, and making tools they themselves could use effectively, however they need to be given clear goals and design models by people who are better placed to understand user needs, and that is where our role as designers come in. I have to say, it’s a lot more readable than the HCI textbook, and Alan Cooper has a great degree of insight into the subject. He recounts the following (rather old) joke, which is quite relevant to our field of user experience.

A pilot is lost flying through cloud, and can’t find the airport to land at. He circles round and round, but still cannot see where he is. He descends until he finds an office block, and sees a man at the window.
He shouts down “I’m lost, where am I?”.
The man replies “You are in an airplane, 100 feet above the ground”.
After hearing that, the pilot immediately flies off, and lands successfully without a problem.
“How did you do it?” he was later asked.
The pilot replies “Well, with an answer like that, I knew I must be at the Microsoft building, and I know my way back from there”.

As we can see, the answer was true, but not helpful. This is what we want to avoid as user experience architects.

I was going to feature here the terrible user experience of Ticketmaster’s website, but I think it’s so bad it could fill an entire blog post on its own. Expect this soon (especially since I’m bitter I didn’t get my Paul McCartney tickets)!

Previous Post
Mobile Games should start quickly (lets get down to business!)
Next Post
Alan Cooper’s The Inmates are Running the Asylum