The Humane Interface by Jef Raskin

Along with Alan Cooper’s book, when starting studying Human Computer Interaction, we were recommended to read Jef Raskin’s The Humane Interface. Having recently finished The Humane Interface, written by a designer of the original Mac (credited with the design of the one button mouse), I will briefly summarise its topics, and give my impressions.

My immediate thoughts are to compare this to Alan Cooper’s the inmates are running the asylum. This book is a harder read than Cooper’s – often going deep into highly technical topics (like how he would like to notate mouse clicks), and lacking the wit or lightness of Inmates. The most readable parts of Raskin’s books are the anecdotes about the development of the Mac and Canon Cat, and these are too few. However, this is likely due to a change in the intended audience, as Cooper’s book intends to sell usability concepts to a business audience, whereas Raskin aims his book directly at computing professionals.

Another key difference between Cooper and Raskin is they favour different methods of investigating the quality of an interface design. Whereas Cooper’s book favours qualitative data and methodology, through the establishment of persona’s and attempting to get inside user’s heads, Raskin favours quantitative methods. He includes a chapter on GOMS, a method of assigning arbitrary times for actions such as typing a keystroke, moving a mouse, thinking and moving from the mouse to the keyboard. Then by adding up the times it takes to do these actions, you can compare interaction methods by the time taken. (Its important to note that these times will not relate to the real world, as user’s act at different speeds, and can only be used to compare against other GOMS scores.)

My initial impression of this form of quantitative research is that it would highlight the speed/efficiency of an interaction, but not the quality – which is not necessarily the same thing. If a task takes a few seconds more, but is considered a lot more fulfilling, GOMS wouldn’t record this. This is particularly relevant to the field of videogames, where a purely GOMS based method to check interaction quality would lead to games such as this below: 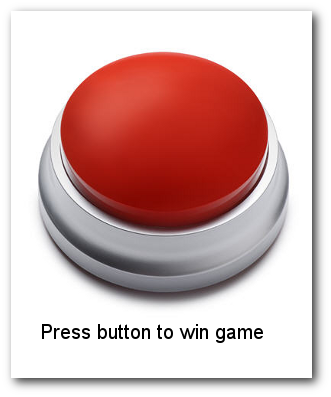 Maybe the computer could press the button for you?

GOMS can be a useful tool to help compare interaction times, but should not be used exclusively.

Raskin also documents a number of problems with current interaction, with a particular dislike for modes (i.e. interactions that do different things in different concepts). A simple way to explain modes is the ‘caps lock’ key; turning on this mode will make ‘TEXT LIKE THIS’, despite my keystrokes being the same as when making ‘text like this’. He advocates an elimination of modes, as they introduce cognitive dissonance, and make it harder to form habits. A useful compromise, Raskin say’s is quasimodes, which is a mode that requires a constant input to achieve (and hence can be part of habit formation). This would include holding the shift key to produce capitals.

The elimination of modes extends into the elimination of applications – typing ‘SUM 7 + 6’ should produce ‘13’ everywhere, not just in a calculator. This improves the quality of interaction by allowing the user to be clear that the methods they have learnt will work anywhere. I believe this trend can be seen in current operating systems (such as the amalgamation of windows explorer and IE), and this is one of Google’s main aims with their OS.

Raskin also advocates an unlimited undo feature (even through closing and re-opening documents), and the elimination of dialog boxes asking ‘are you sure?’ These two are linked, giving that level of undo freedom would make ‘are you sure’ unnecessary, and is more technically feasible now than when the book was written. I assume it’s a matter of conventions, and momentum which would hinder people advocating these new interaction methods, and it is this mindset Raskin is trying to overturn.

An even more radical suggestion is Raskin’s radical redesign to information architecture. Looking at the hierarchical, folder methodology we have of storing files currently, Raskin notes that it is inefficient – from any point, you cannot see what’s in the folders below, or in the level above you. Since the book was published in 2000 we can see efforts have been made to combat these criticisms – in Windows, folder icons now show the file types inside (and previews if they are pictures), and have made it easier to go up a level. On Macs, they have additional folder view types that make it possible to see ‘up’ the hierarchy.

One of the dog playing counterstrike

Zooming in further on this picture would let us read and alter it, but we always have the option to quickly and freely zoom out and see any area of ZoomWorld. The advantage of this system is it solves the issues with being able to see the files above and below at any point, and not be restricted to your current folder. It has been implemented in ‘Archy’, which includes many features Raskin advocates in this book.

Ultimately its interesting seeing how many of the ideas Raskin advocates are ahead of their time, and were included in later revisions of Macs, and in general interaction. (such as searching starting from the first character you type, rather than waiting for you to press ‘enter’). As a book though, it’s harder to get through than Inmates, and does go on in exceptional depth about less than inspiring topics. Raskin talks endlessly about the Canon Cat, a system from the eighties with which he had tried to implement many of his interface ideas. He notes however that it met resistance from users who were used to the existing human computer interaction paradigm, and was not commercially successful. Perhaps, with the moves made by the leading Operating Systems, and Google OS breaking down the barriers between an OS and a browser, people would now be more susceptible to higher quality interaction with computers, and are prepared to unlearn their bad habits.