This year is the tenth anniversary of Quake Matrix. Quake Matrix was a mod for the original Quake, based on the film The Matrix, in which I contributed to the level creation. Starting as a small project among school friends, we went on to have considerable success, featuring on the popular (at the time) PlanetQuake website, and receiving thousands of downloads.

Today I’m going to look back on Quake Matrix, and what we learnt while developing the mod. You’ll have to excuse this post for not being particularly usability/UX focused, but it was the early 2000’s – games usability didn’t exist back then… (jokes!)

Quake Matrix was led by Flax, a friend from my secondary school. As a method to learn games coding, he created a small mod for Quake that slowed down time, and allowed wall running, inspired by the film The Matrix. Impressed, I wouldn’t leave him alone and practically forced him to let me create a website for the mod, and start creating themed maps.

The website, and an alpha version of the mod attracted more attention, both from real life friends and from internet acquaintances. The full mod team included Flax as the code, myself as Head Mapper, Random creating some amazing character models, and Lame, Predator, QMD and Doom providing additional levels (as well as a few other contributors).

The last version of the mod we put out included 21 Maps, 9 new weapons, custom power-ups, sounds, skins, enemies and models as well as a wide range of matrix inspired abilities such as wall running, backflips, slow motion, jumps and locational damage. And much, much more!

There are a number of aspects of the mod’s creation that went really well, and are important lessons for future game development.

The mod benefitted hugely by Flax’s strong design vision and his ability to implement the features he imagined. By having a working alpha to show people, there was little risk of project stagnation and we managed to attract some dedicated talent. Having something playable from the start overcame a common issue in mod development where a team is formed, create some sample skins of an AK47, and then never get anything playable created, causing the members to get bored and move on.

By acting as the lead coder, Flax was also able to accurately scope his ideas, and ensure that the things he wanted to see in the game were feasible. Because he wasn’t just an “ideas man”, the amount of unrealistic features were limited, and time wasn’t wasted!

A huge benefit to the success of the project was the range of strong talent attracted to the game. In particular, the models by Random were (and still are) very impressive:

Also we were lucky to have QMD work with us, who created some fantastic maps. I guess that’s why they call him Quake Map Designer. 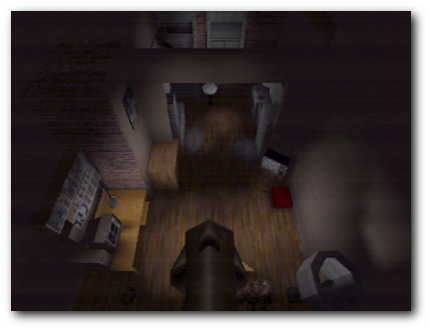 QMD's map of his apartment

What could be improved?

There are a few key findings from the development of Quake Matrix which can be applied to future games development.

Perhaps due to the game’s inception as a project among friends, there was little in the way of quality control on the maps and assets, leading to a wildly variable level of quality. In particular, the contrast between some of the maps made by QMD (above), and those made by me were completely different, not just aesthetically, but in the level of polish. Through the establishment of a more strict (and skill-based) hierarchy, it would be possible to avoid this in the production of a final product.

The second issue with Quake Matrix is the same as affects most mods out there. After 3-4 years of development and incremental releases, the majority of what could be done for the game had been completed, and the project ran out of steam. This was perhaps exacerbated by the age of the Quake engine (we started this project for Q1 around the time of Q3’s release), and the release of NeverWinter Nights, which killed any chance for productivity among the team! Perhaps the mod was finished? Or perhaps there is a lesson here about keeping up motivation through player feedback and setting milestones.

Some of the best moments during the development of Quake Matrix were when we heard about people playing it across the world, and getting in touch through the website or IRC. It also functions as a strong portfolio piece of the team members, having delivered a completed project (despite the old engine and relatively small scope!)

For internet historians, the original site has been rehosted here: http://www.quakewiki.net/archives/qmatrix/ . Also, some of the team still hang about on Quakenet’s IRC, #qmatrix. It’s quiet most days, but hang around and you’ll catch someone! And maybe get a launch date for version 0.6…