Tiny Tower is the hit iPhone game which allows players to build and manage a towerblock and its residents (or ‘bitizens’!). Despite being free, Tiny Tower is continually in the top-grossing apps list due to it’s effective use of free-to-play mechanics.

I spoke to Ian Marsh, one half of Nimblebit, who have had numerous iPhone hits beyond their success with Tiny Tower, including Scoops, Pocket Frogs, Textropolis and more. Ian shared his insight into how understanding player behaviour affects the development of a popular iOS game, and the idiosyncracies of testing with free-to-play mechanics. 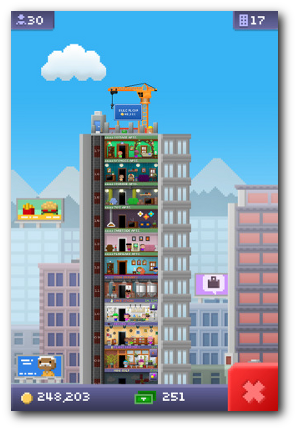 – Have you been keeping track on people’s reactions to your game since release?

Certainly, we keep a close watch on people’s response to the game through monitoring twitter, app store reviews, various forums, and feedback sent directly to us.

– What’s your opinion of the comment’s you’ve been receiving since Tiny Tower’s launch? Have people ‘got’ it?

It has been a very warm reception. We’ve been pretty blown away by the number of people really embracing the game, and very surprised at how little negative feedback there has been.

– Did you let anyone play your game before release? Did their actions/feedback influence your design at all?

We ran a very transformative private beta involving around 30 people. We learned a lot and made a lot of changes to refine the experience. There will always be aspects of a game that the developers are blind to for one reason or another so getting other people involved during development is essential. (NB: Ian asked players for qualitative based feedback, shared through a forum thread)

– Did you take any conscious steps to test the F2P elements with players?

An enjoyable free experience is the most important thing to us so we usually beta test the game without IAP functionality. This lets us balance the game for free players first, then layer on the IAP in a way that is entirely optional for the player. 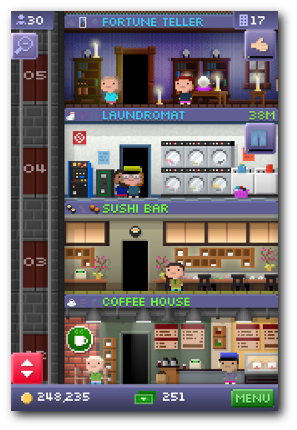 – When you update the game, is it based on feedback you’ve received?

We certainly take all feedback to heart and it sometimes leads to new features, but we’re usually working on or have already considered most features that people suggest.

– How far do you think the game was (and is) lead by your own initial inspiration, and how much has been subject to changes based on player reactions to initial builds?

The game changed quite a bit during the beta period. The main goals and idea of the game remained the same but we were able to change certain systems and tweak progression to keep people more engaged, maximize the fun parts, and minimize the boring bits.

– Looking into the indie/mobile games industry as a whole how do you feel the idea of user-inspired development is being received? Is it still the culture of ‘design is law’ and superstar developers such as John Romero.

I think developers should always listen to criticism and feedback for their games but a good developer has a clear vision of what their game should be and knows whether it would actually improve the game or not. There is always the chance that someone will come up with a good idea that simply never crossed your mind.

Ian’s given some really interesting insights into the current debate over player-led vs designer-led game design, and how free-to-play mechanics should come second to a positive user experience. Their obvious success in this area implies they are on the right track, and we’re all looking forward to seeing what they come out with next!

Tiny Tower is available from the iOS App Store