I like games with interesting ideas and I often try flawed games which feature a unique gimmick. A great experience I had of this recently was Singularity, Raven’s under advertised first person shooter, where the player is given a “time gun” that allows them to manipulate the environment, and enemies, sending them backward and forward in time. Despite being a relatively generic FPS at heart, the gimmick made the game fun, and I would recommend it.

Yesterday I tried MindJack, hoping for a similar experience. It’s a cover based shooter (like Uncharted), where the player is able to manipulate their enemies perceptions – a great idea, however some major usability issues encountered in the first hour put me off the game completely!

The central concept of this game is “mindjacking”. After injuring an enemy, you can take over their body, and make them fight for your team. This is achieved by aiming at the injured enemy, and pressing square – however in practise is almost impossible to execute correctly. There is a very small sweet-spot between “injured” and “dead”, with just one bullet killing an injured enemy. Unfortunately, as the main weapons are automatics, I ended up accidentally killing all potential allies, as the automatic weapon continued firing.

Some potential solutions for this issue would have been: making “injured” enemies invincible (since they no longer fight back), making injured enemies fall to the floor and hence avoid future bullets, or giving some sort of visual indication how close an enemy is to injury, to allow the player to slow down their rate of fire.

Combat in this game is made unnecessarily difficult. Another move you are taught early on is taking enemies as a human shield. However there is no way to let go of an enemy when you do this (I patiently tried every button on the SixAxis, with no luck!). If you take the last enemy as your shield, you are therefore stuck – the game won’t trigger the next bit, as an enemy is alive, however you have no way to kill them! 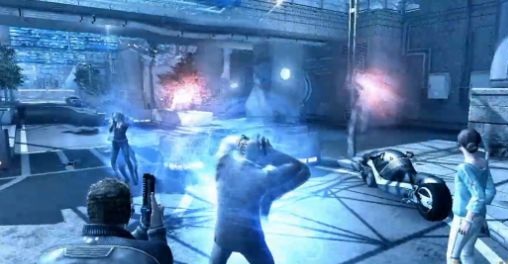 An interesting idea introduced by the game is mixing single and multiplayer games – at any point another person could join your game, and play either on your side, or as an enemy. However, this causes a number of additional usability issues – the most critical of which was that I was unable to start the game! On the main menu, I selected “new game”. Nothing happened. I pressed back, and tried again. Still no response. It was only on the third attempt, where I waited 30 seconds after pressing “new game” that it finally loaded the game. Retrospectively, I assume it was looking for an online server during this time, however no notification or loading dialogue was presented – just the main menu!

Finally, as the game is potentially “always online”, pausing the game doesn’t ‘stop’ the game – even when playing single player. Although only a mild annoyance when I was playing, this has the potentially to cause the player to lose a lot of progress due to deaths – made worse by the large gaps (up to 15 mins playtime) between checkpoints!

Overall, I loved the concept of MindJack, however the execution was poor. I imagine the game didn’t do too well, which is unfortunate, as there is the potential for a sequel which addresses some of these issues to be a good game!