I was surprised to see the amount of misinformation and disdain for playtesting within this thread on reddit. The post is about the decision to change a route in Half Life 2 based on a single playtester getting lost for 30 minutes, and ultimately “remove the maze-like elements”.

It was interesting to see the responses from reddit users. The post title blamed the play tester for being bad at games, however there was an equally strong backlash against the idea of playtesting:

“Anyone older than 20 played games at a time where you had to use your head to complete them, things that frustrated you were part of what made the games more difficult. Being led through a one way path to an inevitable location is not only stupid, it’s boring. Now instead of having to figure out wtf you need to do you are pushed along in an interactive soap opera with bits of “game play” throughout.”

“Remember that time in Call of Duty where you had to think about where you were going to next? I don’t, because it’s all obvious and scripted. If someone got lost while testing they’d replace it until the entire game is one obvious linear path with no options, no adventure, just a pre-scripted movie that you’re in and you’re not allowed to improve.”

“I want my games to be diverse enough to let me at least try and fuck up or just let me learn from my mistakes. That’s how it used to be, fuck up and you’re fucked and have to do it again in a less stupid way. Now it’s all “oh my, did baby have an accident, let me remove the obstacles and start you over with all the helpful tips right there in front of you”.”

To summarise, there seems to be the belief that playtesting is changing games, and that the changes are for the worst. There is a lot of nostalgia for the ‘mazes’ of old games, as seen in pictures like this one: 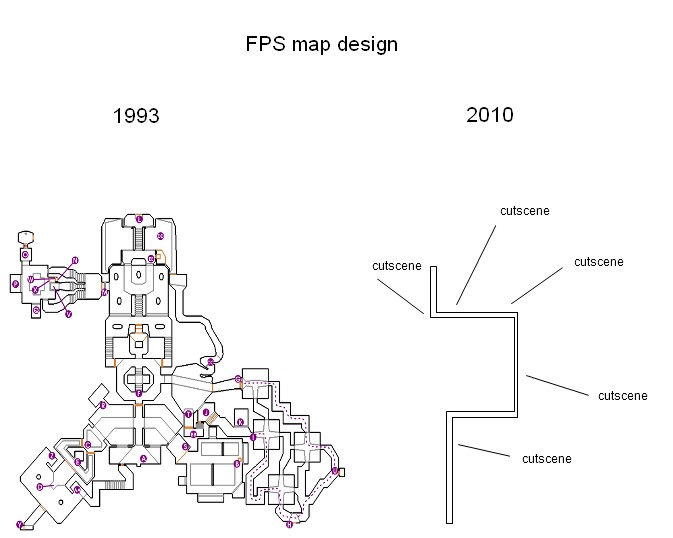 It seems to me that blaming these changes on playtesting is based on a misunderstanding of the purpose of playtesting. Playtesting aims to answer the question “has the designer’s vision been met?”

So in the Half Life 2 example from reddit, we have to ask “does the designer want the player to get lost in the maze?” If not, then there are a number of potential solutions, such as adding visual landmarks to help players orientate themselves, or removing the section altogether, however this is ultimately a design decision. User Researchers can help review potential solutions based on their prior experience, and opinions from players during testing, however the final decision lies with the designer.

It may be true that mazes are no longer fashionable within games. This may be due to a number of factors – a change in player’s expectations or perhaps the ability to create more interesting puzzles. Designers have consciously made the choice to avoid mazes in games, and play testing can be applied to discover whether the designer has achieved this goal. Although a designer’s decisions can be influenced by feedback from players, it is ultimately their responsibility to decide what sort of challenge is appropriate for the experience they are creating.

So have games got easier? Yes and no. Playtesting helps reduce unintentional frustration, however also conversely can ensure that the intended challenges in games work correctly, and the player doesn’t find the game simple.

Feel free to argue in the comments, or dive into the original reddit thread!