The problem with AR games…

… and how User Research can help

Over the last few years, I’ve researched and played many Augmented Reality games. Through this experience, and from looking at reviews of other AR games, I’ve learned how critical user research is to the production of a good AR game, and what can go wrong when research isn’t applied correctly. This article will share with you the most common problem with AR games, and how to research effectively to overcome this.

Augmented Reality games show the player a live-video of the real world, and then something more. This can be anything, from seeing monsters in the world around you, to being able to cast magic spells on your cat.

They most commonly work with small pieces of card, called ‘markers’ which help the game orientate where in the real world it can project images. I first experienced this with a free iPhone proof-of-concept app – where I could print off a piece of paper which, when viewed through the phone’s camera, showed a 3d model of a dragon. 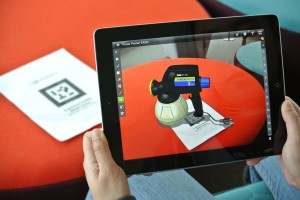 Augmented reality games show the real world, and then something more

The technology and potential for AR games are amazing. However there are also limitations, and when looking at reviews of AR games, I often see the same problem occur time and time again.

The problem with AR games

AR is a good example of Arthur C. Clarke’s law that any sufficiently advanced technology is indistinguishable from magic. The eurogamer review of Book of Spells describes this initial impression: “flipping the book open for the first time evokes a genuine sense of wonder.“ However it’s not magic – behind the scenes the computer or games console is working hard to make create the illusion. And when the technology fails, the illusion is lost.

The most common issue described by reviews of AR games is that the AR illusion fails due to environmental factors, such as the game requiring bright overhead lighting to see the marker, or the game accidentally encouraging the player to move the marker out of ideal conditions.

AR games are often targeted at kids. This makes it especially hard for the player to recover from technical issues, as they can lack the context and understanding of how the technology works, and so are unable to fix technical issues. This is made worse by unhelpful prompts from the game, such as the 3DS’s built in AR games which tells players to “get closer” when it can’t see the marker – a solution that won’t help if the lighting is too poor, or for any number of any other potential technical issues.

Because the technology (and the magic) fails, and because it’s difficult to recover from problems, players will give up on AR games and not come back to them. When looking at trophy data from psnprofiles.com, it can be seen that the drop off from Chapter 1 to Chapter 2 of Book of Spells is almost 20% of players, showing many players gave up quite early during the game.

How user research can fix this

Luckily User Research has the answer. In typical play testing sessions, technical issues are minimal because the test takes part in a lab. The lab has bright overhead lights and is set up in the perfect condition for the game to work.

However people’s real homes aren’t like a user research lab. Rooms are often lit by daylight, or by soft lighting, which can cause AR tech to fail. They can have tables (and pets) between the console and the marker, obscuring the game’s view. These conditions will never arise in the lab, and so researchers will need to leave the lab.

With all the AR games we’ve tested, we’ve advocated and run tests in kid’s homes, to get an understanding of how the game will function in the real world. It’s helped us uncover any number of issues that we wouldn’t find in the lab, and has proved extremely useful in finding and solving issues before the game is on general release.

It can also help validate solutions that the team has implemented – and discover whether the game gives the right instructions or feedback to help kids recover from problems. A nice example of this is in the Wonderbook game Diggs Nightcrawler, where the game gradually ‘fades out’ as the marker becomes more obscured, providing feedback that a problem is occurring, and giving the player the chance to recover before the game comes to an abrupt stop.

Augmented Reality games have their own unique problems, which we cannot anticipate or recreate through typical testing. When making AR games, it’s therefore important to always test the game in the real world to uncover and resolve these issues before they affect real players.