Looking at an iPhone, the immediate thing that strikes most users – compared to other mobile devices – is the lack of buttons. There are 4 in total, and all have very set roles – the power button, the silent switch, the volume control, and the ‘home button’. The home button is the most prominent of these, and sits on the front of the device, below the screen.

All of these buttons are useless for gaming – three have very specific roles, and the home button is exclusively used in the iPhone OS to exit programs and return the user to their ‘home screen’. What this means for gaming is that the device is lacking a critical element that users of consoles have come to rely on – tactile feedback when pressing a button.

Buttons on controllers are important for many reasons. 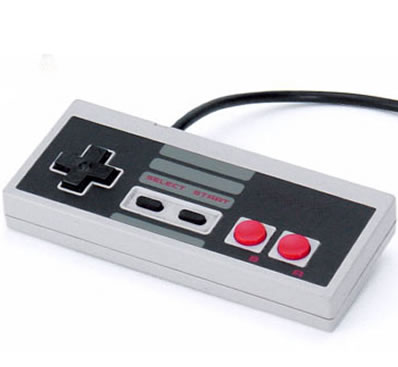 The physical shape and size of buttons are ideally ergonomically placed to make the controller comfortable, and prevent gaming being a painful experience. They should also be placed in places that become intuitive to the user – gamers, like touch typers, should be able to forget about the controller’s physical presence between them and the game, and react naturally to events on the screen without having to think about how to translate their actions through a control pad.

And then theres the iPhone. Game developers aren’t allowed access to any physical buttons for players of their game. They have to innovate (uh-oh!).  Or not.  Some developers, whether its due to the style of game they are trying to present, or just laziness, have just plastered on a ‘on screen joypad’ ontop of their game, with virtual buttons. See, for example, the iPhone port of Duke Nukem 3D.

So that’s 5 virtual buttons, and 4 virtual… test tubes?.. acting as directional controls (two for movement direction, and two for aiming). Obviously the medium of the game (a First Person Shooter), does need a large degree of complex manoeuvres to be performed, but it seems both lazy and ineffective to have these as virtual buttons. Not only does it take up a very large proportion of the small screen’s real estate, but without the physical presence of the buttons, it seems very likely that the wrong buttons will be pressed constantly. This causes the constant need for the player to think about the controls, and will prevent playing from ever becoming truly intuitive. The iPhone does contain tilt sensors, as used in other games as the primary control method, and this could well have been incorporated into the aiming or walking mechanics (although not if you don’t want to draw stares on the bus).

Instead of lazily placing endless virtual directional pads and buttons, developers should be taking the medium into consideration when implementing controls. The iPhone has capability for tilt sensor input, and multi touch (so multiple elements can be selected at once). This has been used successfully to produce games of most formats – in particular Rolando, a tilt platformer, and Doom Resurrection, a tilt FPS being examples of successful implementation of formats traditionally considered to rely on control pads. Moving from a control pad to the iPhone requires novelty and implementing new methods of controlling the games, rather than a simple port. Buttons just don’t work as well without tactile feedback, and totally disregard the other control methods the iPhone allows. As before, I’ll end with an in focus look at two games available on the iPhone, both platformers, one of which successfully implements a suitable control method, one of which fails.

Who does it right?

Rolando, by Handcircus, has been described as the ‘Mario of the iPhone’ (by someone). At heart it’s a traditional platformer, with goals such as getting to the end of the level while overcoming traps, obstacles and enemies. All standard stuff for the genre. However what it does correct is the implementation of this, taking into consideration that it is on the iPhone. To move left or right, the phone is tilted, removing the need for directional controls. A swipe on the screen will cause your character to jump – again no button here. Elements on the screen, such as the lift in the picture, can be manipulated with your finger, which of course your hand is free to do, as you are not restricted by using them to move. So, with Rolando, moving is intuitive, jumping can be done anywhere on the screen, and there is no need for virtual buttons and the problems we’ve identified surrounding them.

Who does it wrong?

Sorry, but its Sonic. Obviously it’s a classic platformer, and an exact port of the version on the master system (so no spin dash!). However the port itself seems lazy – controls being implemented by simply placing a virtual d-pad and jump button on the screen. For a game that involves precision jumping, such as Sonic, this is a huge mistake. Lacking tactile feedback on which direction you are pressing, or whether you have your finger above the jump button, can (and often does) lead to missing jumps, and frustrating deaths. And, with no level-select, three deaths will mean starting the game from the beginning. Ultimately it makes the gaming experience frustrating and removes a lot of the fun that the sonic series used to be about! A design failure.

Subject: I am cooking chicken and rice

Review: It’s alright. Its Sonic as you would expect but with dodgy controls. I’ve played it twice, too fiddly to sit and enjoy I found.

4 Comments On “Controls should be appropriate to the iPhone’s input methods (shake now!)”