My membership to the Usability Professional’s Association went through this week (although disappointingly I have to wait a whole 4-5 weeks for my Designing The User Experience poster), and to celebrate I went to the UX Brighton event (‘Remote User Research – A 360˚ View’ ), and met the head of the UK Chapter of the UPA, Claire Mitchell (small world!).  I’ve written more about this at the end of this blog post, but it’s a bit epic, so I’ll cover everything else first! 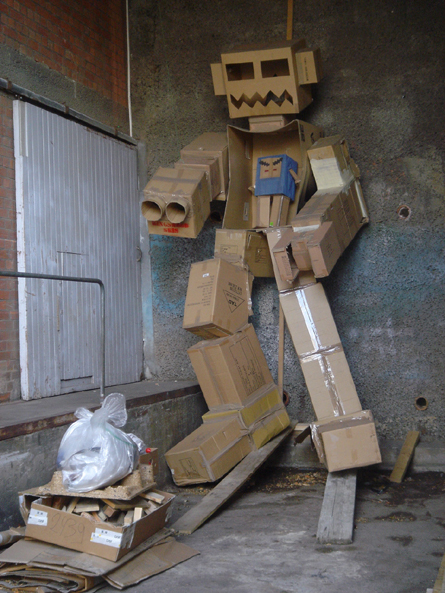 This week in HCCS, we’ve been learning about the process making of paper mockups (mostly scissors and sticky back plastic!), and the advantages (quick, manages user’s expectations, gives the opportunity to hide in a box and pretend to be a robot).

This has been supplemented by the (rather dull) course text book by Dix ‘Human Computer Interaction’. Dix tells us about the ways to input information into a human (sight, touch, sound, smell etc. ), how it’s stored (sensory input, short and long term memory – needs more ram!), and our limitations (we can only remember around 7 chunks at a time – a factor in Tetris’s success!). When amazon can be bothered to deliver it, I’ve ordered Alan Cooper’s (The Inmates are Running the Asylum), which should be a more interesting read.

As documented in Krug’s Don’t Make Me Think most users will ‘scan’ a page rather than read the full text, looking for buttons or links which do the task they are looking for. As someone looking to sign in, my ‘scan’ would reject this link as a) ‘Sign In’ isn’t the link and b) You’d assume the link would take you to personalised recommendations, not the sign in page. However, as we discussed in class, Amazon do a lot of A&B testing (running two versions of the page concurrently with slight differences, to see which ones get the most successful ‘goal completion’ rate). Therefore we have to imagine that this has been a conscious choice by amazon, either because more people are looking for personalized recommendations that to log in, or because it increases customer’s awareness of this feature.

We’ve been given the task of logging our experiences with technology through a day, and considering them from a design point of view. That’s what you lucky people are in for now! (hold on tight, its ranty!)

Alarm Clock – Hit snooze (big button on top, good design feature). Turned it off by turning the radio on and off. Design fail – I imagine there’s an ‘official’ way to turn the alarm off, but in ten years of use, I’ve never found it. 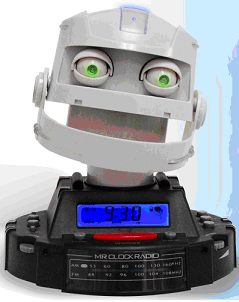 design success - you wont fall asleep with this alarm clock near you!

iPhone – ran out of battery last night, and I left the plug of the charger at my parents, so has to charge off USB. Plugged it into my work laptop to charge, but the USB only charges when the laptop is open (not in standby!) Design fail – annoying that I have to have the laptop open to charge my phone.

TV – is quite old, and turns on to the analogue channels, rather than the scart input. We have cable, so it only ever uses scart. I guess it should auto detect whether theres analogue or scart data being fed in, and select which to show automatically. Design fail – It doesn’t though.

Laptop – Backlights failed on the screen, so have to take it into work to get it replaced. Replacement has no battery life, so won’t survive unplugged. Design fail – Laptops too frail for my clumsy ways.

Successfully got to my desk with the new laptop, and charged my phone with no design issues!

IP Phone – I don’t understand it. It says I have a missed call, but no details of when/who/what. Red light is lit up on handset, I cant recall whether its always been like that. Later in the day it tells me I have a voicemail, with a flashing envelope icon. I lift up the receiver, and press the button next to the flashing icon. Nothing happens. I try again with the receiver down, the phone beeps at me. I lift up the receiver, and try other things. The button marked messages does it. It asks for a pin. I have no idea, but am logged into the phone, so it should know its me already, right? Eventually find my registration email with a voicemail pin. Successfully retrieve voicemail. Design fail – too many to count.

Coffee machine – I’ve worked this out now, but it took a short amount of observation when I joined. Its next to a pile of cups. Do you need to put the cup in the machine before selecting the drink? If so, where? (turns out, for all of you who are worrying, that it doesn’t need any cups, it automatically gives you one) Design fail – Not clear how to load/use initially.

Sky+ – I’m not particularly familiar with Sky+, so it’s a learning experience… Design fail – Everytime you return to the TV guide, it goes to the start of the list!

Book – papercut! Ow! Design fail – paper should be replaced with some sort of foam.

What a busy day!

My impressions of the UX Brighton event

The Remote User Research – A 360˚ View event was in the Old Music Library, which although lacking in heating and lighting, does have a lot more scary art than most venues. Free beer was generously supplied by the sponsors, which starts the night off on a good foot. The topic of the evening was performing remote usability testing, with talks given by Feralabs, Ethnolabs, Pidoco, and Flow.

The first three talks were presentations of technology the companies had developed. Ethnolabs have produced an API which collects data on specifically tagged topics from feeds such as twitter, social network sites and email correspondents, which can then be used to correlate user experiences. The example they used to demonstrate this was people’s impressions of a new digital camera. Although their API technology seemed functional, I was under whelmed by their product – although the piecemeal opinions of users aren’t useless, I think that without specific tasks to try to achieve, or interview questions being asked, it’d be hard to achieve any standardized conclusions from the data.  Also I’d question what incentives would be offered to the user’s to bother to tweet their opinions – surely without an incentive causing every user to tweet, the data retrieved will be rather biased to the polarized views (“I hate this!”).

The second talk was by pidoco, and was about their collaborative wireframing tool. The technology here did impress me, and I can see the use in immediately being able to adjust and present new wireframes to a client remotely (the system also logged voice, so longer suggestions could be reviewed later). The artistic style of the wireframes imitated pencil sketches, rather than the precise lines you’d get in omnigraffle, which is also helpful in managing client’s expectations. I know before I’ve presented wireframes that look precise, and the client has spent along time reviewing minor items like the text within it. Pidoco’s tools’ emphasis on a rough sketch aesthetic would help manage situations like this!

The last two talks were slightly linked – a presentation of a remote data logging tool by Feralabs, which gives users tasks to complete and logs their precise experience in doing this, and a report by Flow on their experiences using this tool. The tool seemed effective, logging the user’s navigation, mouse clicks, and asking them questions after, and Flow’s review was interesting, and sold the idea to me. I would defiantly consider using a logging technology like this in performing certain kinds of usability testing. In the heated Q&A session after, it was discussed at length that this should be used in conjunction, and not instead of face to face interviews, for it was agreed that remote usability studies cannot log or reproduce every element of a close personal study, you fail to see the emotions and reactions of the participant involved, and it’s harder to adapt the test to study interesting emerging behaviour variants. However, it is cheaper, and I know the business side of most organisations will like the sound of that!

Previous Post
Controls should be appropriate to the iPhone’s input methods (shake now!)
Next Post
Mobile Games should start quickly (lets get down to business!)