How to make an addictive social game

Unlike some ‘triple A’ game developers, web-based social game designers quickly recognised how important usability and user experience are to their success. With customers being able to easily access their content for free, without making a commitment to paying for their gaming experience up-front, it’s extremely important to attract and retain players in the first few minutes.

Today I’ll be looking at the first 5 minutes of a successful social game, and highlighting which elements have made this game successful. In the future we’ll look at some games which have missed the point, and hence lost a large proportion of their customer base. From this, we can learn how to make an addictive social game.

The game we were originally going to study was intended to be Farmville, since Farmville is famously the ‘poster-child’ of social gaming success. However it wanted me to connect with my facebook account, and wouldn’t let me play without doing so. Game over!  (Presumably this is just an annoyance to me however, and hasn’t stopped the game’s success)

Instead, I looked at the ‘Top Grossing’ iPhone apps, and found ‘Smurf’s Village’. Like farmville, it’s a landforming game, where the player has to create a new village for the Smurfs, and look after their crops. Most importantly, it’s free, yet still a top-grossing app – clearly a sign of it’s continued success. (or was it all the work of this kid charging $1400 to their parents credit card) So, what happens in the first 5 minutes of Smurf’s Village?

The first thing that happens when running the game is that it asks if I want to hook it up to facebook. This is a key business goal for the app developer, since it increases awareness of the game and is a key element to how social games work. Importantly for the user experience however, it is optional (unlike Farmville). I declined at this time:

After a very short introductory story, explaining why the Smurfs are moving, the game drops you straight into making a new village. With clear directions, the game tells me to click on the sign and lay a plot of land: 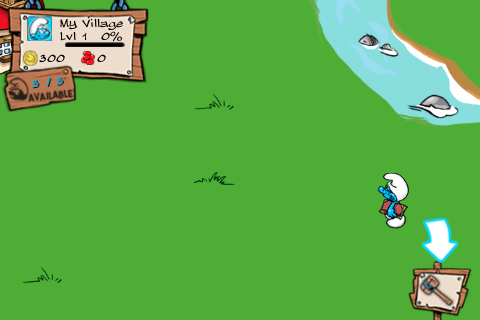 And with that, I get an immediate positive reaction “Quest complete”, and reinforcement of the lesson I just learnt: 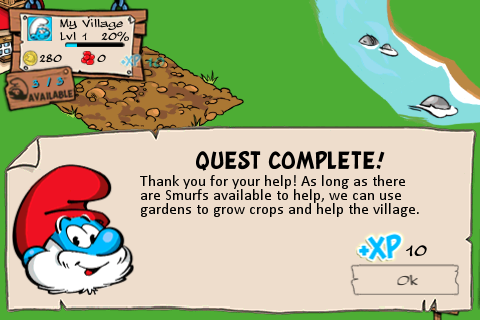 Now the same happens again with ‘growing blueberrys’, where an arrow clearly indicates what I need to do, and I’m given positive reinforcement having completed this task: 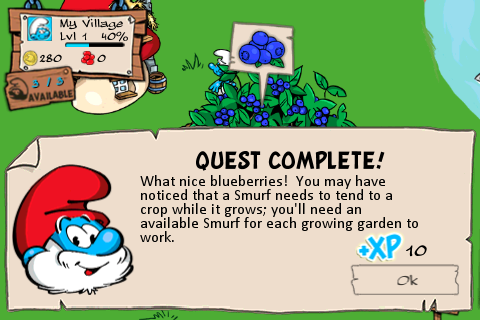 And with that, a level up is gained: 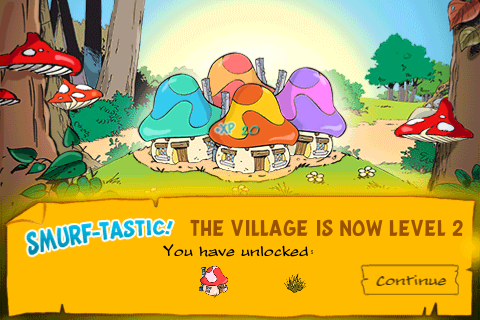 The game goes on, with the next level teaching you how to build a house, and crucially linking speeded up progress with using smurfberrys. Since smurfberries are the games in-app-purchase, and hence the primary method the developer makes money, this is an important link to make early on: 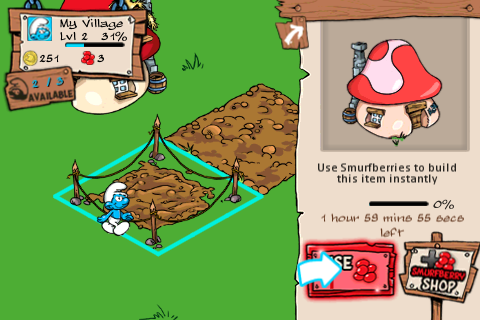 This earns me another level up. The game then goes on to repeat this to teach me how to build grass, before letting me play a mini-game to break up the monotony. If I were to continue playing beyond the first few minutes, the game would go on to ‘set me free’ and let me use the lesson’s I’ve learnt to continue to build the village unguided.

So, what magic rules did we find that led to a successful first 5 minutes with this game?

1. Explain actions one at a time, let the player do them

2. Reward the player for performing an action correctly

3. Show the player the potential of what they can achieve

All these factors have been an important part of the continued success of this social game. Soon I will look at an alternative, unsuccessful, social game, and note what factors lead to its failure.