As part of my Masters project I’ve been studying the patterns found in social interaction while gaming, and how people play games together (much more on this soon). Last week saw the release of Ubisoft’s “We Dare” across Europe. Here in the UK, our delicate sensibilities have been spared from this game, apparently due to the public’s reaction to the trailer, however it’s clear from footage and reviews that We Dare would lead to …interesting social interaction.

We Dare is a collection of mini-games. The game’s unique selling point is that these mini-games are meant to be risqué, and include activities such as stripping and spanking. This advert on youtube will give you a clear indication on the content in game.  Sexy right? Just like a trip to GAME. 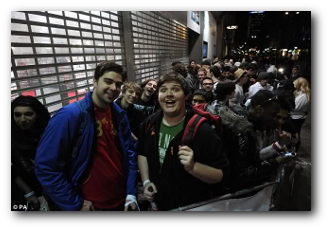 In the studies I’ve been working on currently, we’ve tried to define the key behaviours noticed in social situations while playing games. These typically can be divided into categories such as “Sharing awareness”, where the players discuss game mechanics or what’s happening to their player, and “Trash Talk”, where players smack each other’s bitch up. These interactions can typically be found in most multiplayer games, from Mario Kart to Little Big Planet.

However We Dare seems to encourage a whole new group of interactions. Here are some of the potential behaviours you may see while playing:

Ironic “I’m into it”

Ultimately We Dare seems to have been designed to create a very very creepy experience, and a fascinating field to study! It’s just a shame the game itself is rubbish.