Just a quick one.

Some of you may have seen Sony’s ‘Yaybuttons’ website. It’s a great introduction to why the Move will be the popular choice for ‘core’ gamers over the rival motion-based system Kinect, since buttons give the kind of responsive feedback that popular FPS and action games demand (Image playing call of duty with just motion sensitive controls!).

If you haven’t seen it yet, you can see their website here: Yay Buttons

Today the first pictures of Sony’s Google TV controller were revealed. Here it is: 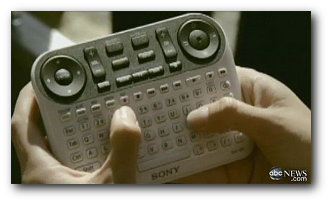 I think Sony have taken their love of buttons too far.