The playability heuristics (guidelines) by Desurvire provide a quick and easy guide to the ‘playability’ of a game, as we’ve seen before. Today, we look at what they tell us about the user experience, and usability, through applying them to a classic game – Pong.  For brevity, we’re only looking at the game play, and story (other heuristics are available from all good stores).

For those of you who are interested in game usability, and yet inexplicably are unaware of Pong, it’s the classic (stolen) 1970’s table tennis simulator. It makes a sound like ‘plink’, and looks like this: 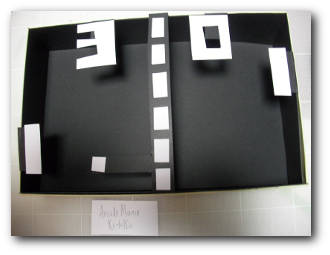 And on with the show.

Due to the lack of anti-aliasing technology, Pong had to stand on its game-play alone. However, as we’ll see, there is only mixed success in this area.

Get the ball past the other player. Ten times. That’s a pretty clear goal (although it loses points for not actually explaining this goal in game – I have to assume it was written on the cabinet).

The first player action is painfully obvious and should result in immediate positive feedback.

Pace the game to apply pressure but not frustrate the player. Vary the difficulty level so that the player has greater challenge as they develop mastery. Easy to learn, hard to master.

So the ball gets faster when I successfully return it. I suppose that is ‘incremental difficulty’. Wouldn’t really say “hard to master though”

Game play should be balanced with multiple ways to win.

Player’s fatigue is minimized by varying activities and pacing during game play.

Provide consistency between the game elements and the overarching setting and story to suspend disbelief.

The ball is square. The bats are disembodied. The ball doesn’t bounce. No-one makes me play in shorts (doesn’t stop me). It’s not really like table tennis is it.

There is an interesting and absorbing tutorial that mimics game play.

There is only a tutorial in the sense that ‘a computer defeats you at virtual table tennis’ teaches you that you’ve achieved nothing.

Player is taught skills early that you expect the players to use later, or right before the new skill is needed.

Players discover the story as part of game play.

I wasn’t even aware there was a story, until I purchased Pong: The Novel (sold separately)

Player should not experience being penalized repetitively for the same failure.

The game only has one type of failure – missing the ball. It’s hard not to be repetitive.

Player’s should perceive a sense of control and impact onto the game world. The game world reacts to the player and remembers their passage through it. Changes the player makes in the game world are persistent and noticeable if they back-track to where they’ve been before.

Player 1 had trained for this moment. His sensei had honed his reactions until they had become automatic, felt in his heart instead of his hand. His tutor had gone through the maths behind each shot again and again, until Player 1 no-longer saw a ball, he saw a formula. His parents had bound his body throughout childhood, distorting his body into an unrecognisable mass, yet formed perfectly for table tennis.

And it had all been for this.

The game had been hard so far. His opponent, the notorious ‘CPU’, was his equal in every way – not only matching him in skills, but, due to a freak accident of nature, being his exact double in looks. His opponent’s cool demeanour betrayed no hint of the rivalry between the two of them. Ever since that day back in playschool, with the shark and the peanut butter.

But it was no time for reminiscing. Player 1 had strived too long and come too far to lose now. And with the seconds ticking by, and their volley reaching lightning speeds, now was the time to strike.

It wasn’t conscious. It barely even registered to Player 1 that a mistake had been made, but when CPU passed the ball back dead straight, instinct took over. He moved very slightly upward, bringing his lower half in line with the square ball. This was it. Inching ever so slightly upwards, until just a sliver remaining in the firing line. Then… bang! Contact! The ball had grazed his side, and was on its way back, spiralling off to the top of the screen. His opponent scrambled to get in line. The ball drew ever closer, crossing the dotted centre line. It was out of Player 1’s hands – only the gods could intervene now. But no deity was watching, or if they were, they were smiling on Player A.

The square ball squeezed effortlessly passed CPU. That was it! It was a goal! Player 1’s ghostly white face gave no hint of the jubilant celebration going on inside.

Hanging silently above the field, it’s radiant light illuminating the entire stage, the score digit increased by one.

Player 1 had made his mark.

The game should give rewards that immerse the player more deeply in the game by increasing their capabilities (power-up), and expanding their ability to customize.

No blue shell, no cardboard box, and no Odd-job. No customisation. 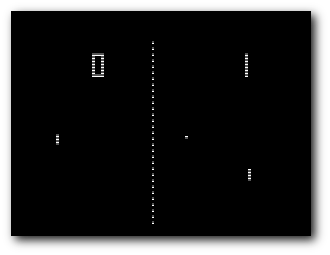 So, the game play wasn’t fantastic. What about the story though?

The Player has a sense of control over their character and is able to use tactics and strategies.

To be fair, there is just as much strategy as in the game of table tennis. ‘trick’ the computer player, by knocking the ball at extreme angles. And you definitely control the character. A success!

It’s a battle of skill, with the computer constrained to the same rules as you. It’s definitely fair.

Player understands the story line as a single consistent vision.

Player is interested in the story line. The story experience relates to their real life and grabs their interest.

Bored of this now. Nope.

The Player feels as though the world is going on whether their character is there or not.

Terrible game, will never catch on.

Despite this, if you want to try it yourself the closest recreation of classic pong I could find is here