Tony Gowland is a UK based video game designer and recently created the critically acclaimed puzzling platform game Tealy and Orangey (You should go try it now. I’ll wait…). I asked him to share his unique perspective on the role of user experience and play-testing in the game’s development. Tony shares with us his views on how user insight is particularly important for producing web based games, how he recruited playtesters and how the balance between ‘top-down design’ and playtesting influenced the production of his game.

I think the end user experience is extremely important in games, and perhaps even more so in free to play web games. When a player’s already shelled out £40 on a new game they are going to give it the benefit of the doubt and keep at it for at least the first hour or so. There are so many poor flash games across the various portals that I suspect the majority of players click on to your game expecting the worst. So you have to give them a reason to keep playing as quickly as possible, and fight to keep their attention. 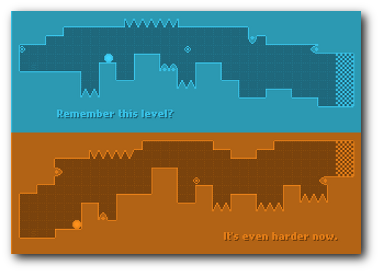 With Tealy & Orangey I knew I didn’t have the art skill to make it big and flashy, so I had to go in the opposite direction and make it deliberately lo-fi, then hope that the gameplay would grab people and keep them playing. With that in mind I didn’t have any kind of splash screen, just the initial “start / continue” menu, and then straight in to the game.

I was also pretty worried about the ordering of levels. I wanted to keep the “twist” of the game – that Tealy & Orangey don’t exist in entirely separate levels, and can cross over into each other’s space – until the player had already experienced enough to build up the preconception that they were always going to be apart.

There’s a private forum I’m a member of, along with around half a dozen other developers who I used to work with. Most of the time we just chat away about random stuff, but whenever one of us has been making something, we share it out to get opinions. We’re all close friends, so we know we’ll get good truthful opinions. I showed them T&O and they generally liked it, as well as having a few suggestions for changes.

So the first public version had already gone through a couple of waves of this private playtesting (the main casualty of which was moving platforms – just too much stuff moving at once for a player to keep track of).

Once the general public started playing I did keep a close eye on user comments – Google Alerts is pretty good for this, as you can find any new places your game’s been mentioned. Mostly it was positive, and many of the negatives are about difficulty.

I knew the difficulty would be divisive – I suppose this is one of the situations where developing a game in your spare time affords you much more freedom, as I wasn’t a slave to any marketing desire to make the game accessible to players of all ability. I knew the indie space had already produced some titles like VVVVVV and Meat Boy that were held dear in part because they offer such a challenge, which tells you there’s a market there for a challenge (maybe not a bit enough market for a AAA development budget, but enough for me!)

The flip side of this is that I am terrible at the notoriously difficult games like N+ and Ninja Gaiden, so as long as I could complete the game myself, it wouldn’t be the most difficult thing out there. Which put T&O in a difficulty bracket I was happy with.

The current version of T&O that’s on my site and Kongregate is I think the 3rd public update. The 1st had a bugfix that was something of a schoolboy error that I’m not going to divulge. The 2nd added Kongregate’s high score system, because players had asked for their best scores to be output to the web. The most recent update added a mouse clickable front end (major dropped ball on my part – some players had complained that the game hadn’t started for them when they had clicked on the “start” menu option, and that was that, I’d lost their attention and they’d moved on to the next game) and some sound effects.

I’m not quite sure what I would have done if I’d had major feedback about the gameplay itself. Quite possibly nothing. I’m not trying to sell the game after all, it was made as something I wanted to play.

I have definitely noticed other developers paying a lot more attention to user feedback. I think the current generation has made that much more apparent and available to console developers. Rather than having to save the feedback for the sequel, now you can change things with a patch. I think the biggest examples of this are the recent XBLA game Hydrophobia that, after bad reviews and feedback, has had a huge update, and also Burnout Paradise which now has a completely different boot to game user experience from what was originally shipped, based on what their players wanted from the game.

Tony Gowland blogs regularly at www.mainlyaboutgames.co.uk and his new game, Tealy and Orangey is free to play at Kongregate.