Applying service design principles to games development offers new opportunities for designers, researchers and producers to understand and influence the development of games. As many games move towards a model of providing content over time, a faster cadence for games development means that dedicated effort to understanding and influencing the content creation process becomes a valuable use of time. The behind-the-scenes content creation process has an impact both on the game itself, and on the community around the game, and so allows increased influence over the player experience.

This blog post shares some of my thoughts on the topic – inspired by a great chat with Sorcha Millican-Nagle. Sorcha works as a producer in games, and is enthusiastic about bridging the gap between service design and games. She is active on the Games User Research discord as Cyrup, or LinkedIn and is interested in hearing other people’s perspectives on the topic, if you have thoughts!

What is Service Design?

The field of user experience (UX) is interested in understanding and defining how people will use software. This is usually done with a mutually beneficial intent. The theory is that by making people enjoy using software (or at a minimum reduce some frustration with it), the software company will earn more money because people will use their software for longer, or choose it over competitors.

It’s reasonably obvious that how users feel about software isn’t just impacted by the software itself, but also the context they are using the software in. For games, the player’s experience isn’t just impacted by the quality of the game, but also the journey they take to purchase that game (such as going to an online store, finding the game, downloading it, the install process, patching, then starting it). Their experience is also impacted by factors outside of the platform all-together, for example their interaction with the game’s community online, their exposure to marketing, or the pace and content of updates, will all impact a player’s thoughts, opinions and behaviour when playing a game.

Hence the user experience of playing a game is influenced by a lot of factors outside the game. Understanding and changing those factors is design, and should be described as designing the user’s experience. However the term ‘UX Designer’ has been co-opted to describe a much narrower field, and commonly describes people who design the interactions or information architecture within software. In the field of games, a UX designer may be working on tutorials, menus, controls, and the sequencing of how players learn and perform tasks. What they do not seem to do is understand and influence the experience outside the game. Questions such as how do players acquire the game, what is their experience installing and starting it, how does the wider game community influence what knowledge and behaviour players have when they play, what do players know about the game before they come into it, how do updates work, are all left un-understood and uncurated, yet they impact the player’s experience.

Because of the co-opting of the term ‘UX Design’, the term ‘Service Design’ has been used to describe the role of understanding and curating the end-to-end experience of users. Service Designers go beyond just describing how the software should work, and see their responsibility as controlling all of the factors that influence the user’s experience – including the software, the other touch-points that users interact with, and the behind-the-scenes factors that impact what the user sees, such as how the community is moderated, or how updates are sized, scheduled and released.

In the olden days, games came on physical media. The code for the completed game was copied onto a tape, cartridge or disk and sold in a shop. This meant it was very difficult to make changes post-launch – without any way of patching games, the game on the disk was the final version, and problems – whether they were bugs, performance issues or exploits – couldn’t be addressed.

The internet changed that – when consoles started going online, it enabled games to be updated after launch. As internet connections became faster and more common, the types of content that could be released post-launch evolved, and more substantial updates were being created – from regular content updates for massively multiplayer online RPG’s, such as World Of Warcraft, to DLC releases and season passes for Destiny 2. Game studios and publishers started to recognise the value of providing content updates over time as a way of retaining players.

This change from thinking of a game as a one-off boxed product, to a regular stream of content, has been called ‘Games As A Service’.

Games as a Service (GaaS) greatly increases the opportunity, and the importance of controlling all of the factors that influence a player’s experience outside of the game. Because GaaS aims to build a long term relationship with the player, reducing friction around how new content is created, communicated, distributed and integrated within how people play becomes a lot more important, and has a direct impact on the long term success of a game, as does their interaction with the community.

I believe there are not many people with the job title ‘service designer’ working in games, and so this role of understanding how decisions made inside the company will impact on players has fallen to people with other job titles, like producers or product managers, if done at all. Many of the factors that impact the player’s experience playing a game are influenced by how staff inside the company do their job, or the decisions being made by all of the disciplines inside a games studio – not just the ones who directly make software. This design brief is very broad and hard to grasp, and techniques such as journey mapping how internal staff do their job are essential to being able to understand, describe, and ultimately influence how games get made. Describing how staff should change what they do, seeing those changes through, and checking that the change has the intended impact on the player’s experience is all part of the design process, and needs to be recognised so that it can be consciously done, rather than happen by accident.

Recognising other types of users

This also offers big opportunities for user researchers within the field of games. Currently a lot of user researchers focus on evaluating the impact of the game itself on the player’s experience. However in order to be able to make effective changes to the game dev process which influences the software, and ultimately the player experience, it’s also essential to understand how game studio staff perform their role, and how that influences the final product. Staff are users too, and understanding their goals, the things that influence their behaviour, and the issues they experience in performing their role are essential to being able to make more holistic changes to the player-facing elements of the game. 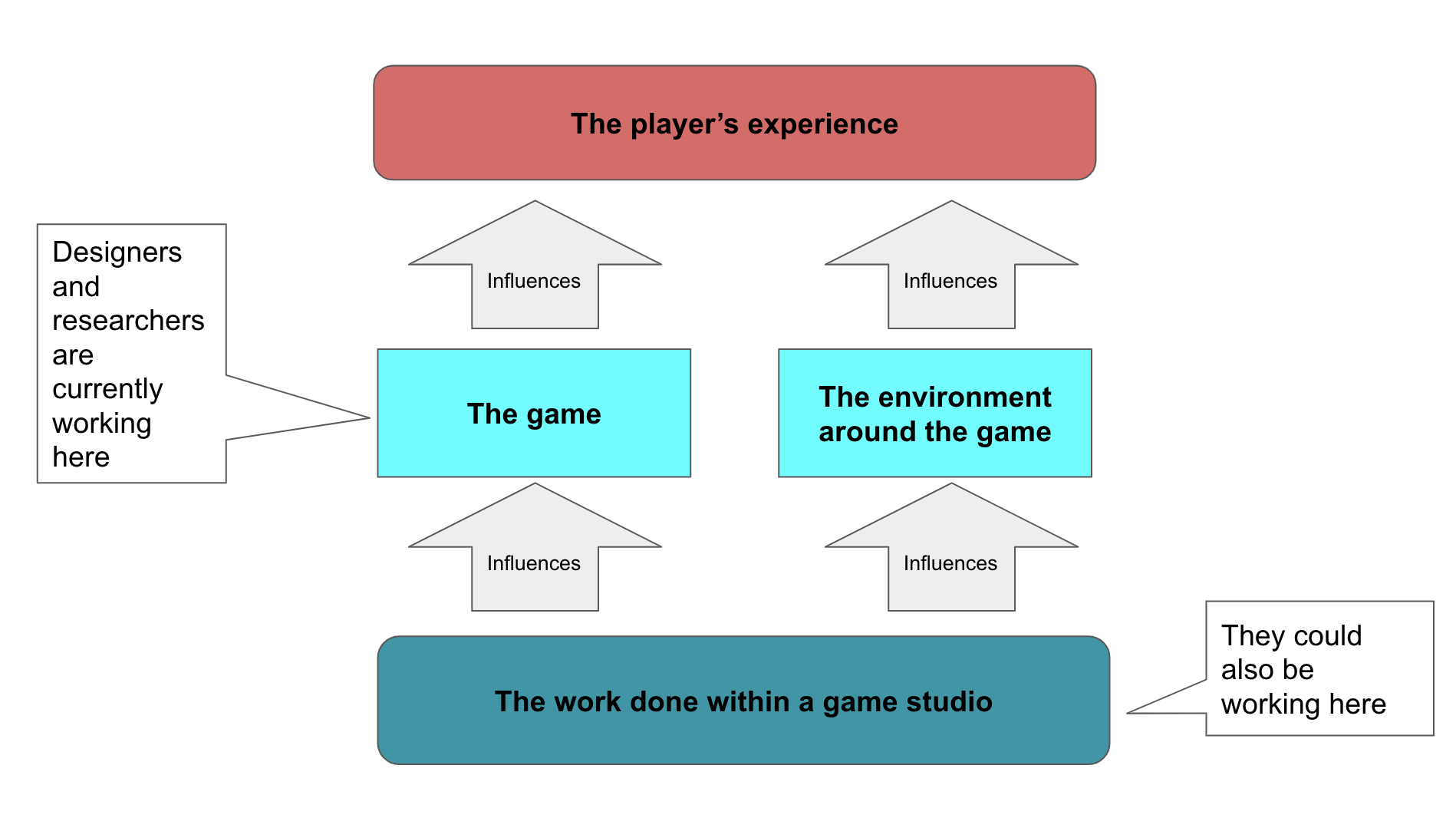 A benefit of working at a lower level, to understand, design and improve the game development process is that it gives control over a greater range of factors that influence the player’s experience. Looking holistically beyond the game to the environment around the game recognises that the player’s experience isn’t just a result of the game itself, and gives a lot more levers that can be manipulated to create the intended player experience. This environment is a result of the work being done inside of the game studio, and so it’s essential to understand internal users in order to change the player experience.

However applying service design principles is not easy. When players are the subject of user research, each individual player has low influence on the development of the game and can be passive subjects as research is done ‘to’ them. In contrast staff have strong domain expertise, a lot of influence within the company, and are highly motivated to ensure that their needs are met, because it directly impacts what they do between 9 and 5 each day. As a consequence a collaborative approach is essential to ensure that their expertise, issues and goals are adequately understood and the lessons from them applied. This can require the whole team to understand and see the value of this approach, because it will eventually end with asking people to do their job differently, which can be very difficult to implement.

Despite the difficulty, the opportunities offered by consciously understanding and controlling more of the factors that influence a player’s experience with the game empowers game developers to make a better experience, and can be a fruitful area to explore in the future.