Recently I’ve been enjoying playing the Xbox Live Arcade port of Perfect Dark – I played this extensively as a kid (especially the multiplayer with it’s groundbreaking inclusion of computer-controlled bots!). However without the rose-tinted glasses, a number of obvious usability issues come to light.

Today I’ll look at the major usability problem in this game, and how it would be fixed if Perfect Dark was made today!

When playing Perfect Dark, the immediate difference I noted to current-gen games was how long I spent lost, with little idea of where I should be heading, and with a severe risk of failing or missing objectives without any prior-knowledge. 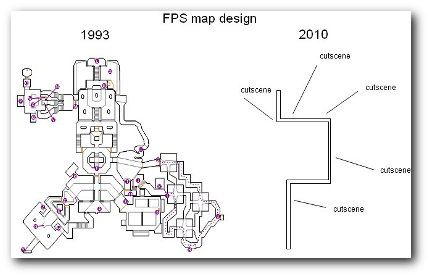 Level Design - Then and Now

As is obvious in the picture above, level design has changed. In the nineties it was common to make the player trek endlessly through corridors, searching out key codes or objectives to extend the playing time of the game.

Throughout the game, Perfect Dark is guilty of this, leaving the player to wander endlessly through corridors with an ill-defined objective, only randomly stumbling upon the item they need to proceed. This is particularly evident in the plane crash level, where the player is left in an arctic tundra to search for a “medical scanner” (without mention that it looks like a suitcase), with no direction as to where this can be found across the miles of map, and no ‘signposting’ to indicate when the player is close.

Later on, the player is exploring a boat and has to trawl up and down endless staircases and corridors. Without visible landmarks, the player quickly becomes disorientated, and can only tell if they’ve walked through an area before by the bullet holes in the wall…

How would Perfect Dark be different today?

Games today are a lot better at guiding the player, since the player’s experience while enjoying the game has become more important than the game’s longevity.  How to do this correctly is the sort of thing usability can solve. 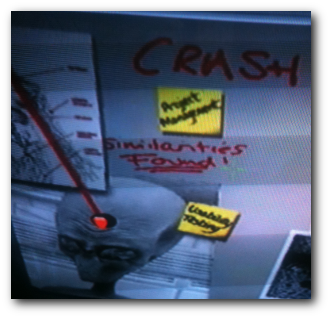 Focusing on the player experience has lead to the creation of a ‘toolkit’ for games that can be used to direct player attention to specific items, a few of which I’ve listed here:

Any, or all of these in combination, can lead to a better player experience and overcome major usability issues around player attention and goal definition.