It’s easy to forget how useful it is to watch less technical people use some common programs, and how helpful observation is as a tool to understand the ‘average’ user. I recently watched someone using MS Word (2003 I think), and it was…enlightening. They made a large number of ‘errors’ when using MS Word, but as we know as usability specialists, its not the the user that creates errors – the software does.

The task was relatively simple – design some worksheets, including textboxes, and pictures, and lay them out in an eye-pleasing manner. I’m sure there are many more appropriate packages to make this in than Word, but it was the user’s software of choice, due to familiarity, and the task shouldn’t be beyond MS Word. I observed, and let them lead the interaction, but advised when they asked for help (naughty I know, but it wasn’t a formal lab setting!) 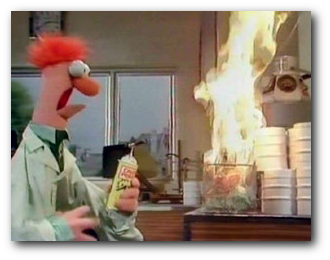 The lab was busy that day anyway...

How my ‘less-technical user’ used Word:

I noted down (obviously away from the user) some of the more ‘interesting’ characteristics of how they used Word.

What could word do to improve?

This immediately throws up some questions about how Word was developed. It’s clear that the tools available, such as the alignment, or horizontal lines, are not making their functionality transparent to new users. It wasn’t clear to my user that they existed, or how they should be functioning. Obviously just having the icon on the toolbar isn’t enough, and this should be rethought.

This was also the case with image manipulation. The functions that the user needed do exist in Word (i.e. resizing, moving), but are modal in nature, and so are difficult to find, and don’t offer a consistent user experience to someone who is not familiar with Word’s nuances.

It’s also clear with auto format in particular that the system isn’t adapting to the user’s needs. The constant changes that Word was making to the user’s document, which were then undone each time only created a large degree of frustration in the user. The software should be learning how the user wants auto format to work, and adjust to their preference. In this user’s case, it was causing trouble, and should have turned itself off (or at least given the option) 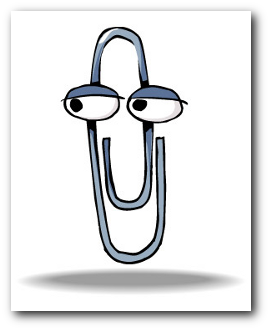 What they need is some sort of helpful assistant

What should we learn from this?

It occurred to me that these issues were not unique to the user I watched since I encounter similar problems with Word. The difference is I’ve had enough familiarity to learn the workarounds, or solutions to these problems that Word throws at you. For example, it’s an unthinking reaction to press Ctrl+Z after Word incorrectly auto-formats things incorrectly. My user just hadn’t used the program for long enough to train that reaction, and so word’s error became more of a big deal.

Its important when considered usability to realise that users aren’t just like you. If you are in a position to make a difference with usability, it’s very likely you are not an ‘average user’, and as such its difficult to comprehend how ‘average users’ use software.

‘Average users’ are not stupid. They are your mum, and just don’t have the time, or effort to put into learning these workarounds, or making them second nature. The solution, rather than ‘educating’ users, is to make the programs better; make programmers understand who their users are, and how they use the programs. And make them program for the ‘average’ users, rather than the power users. And that is the point of usability.