Just a quick one today, that I’ve been sitting on for a while. I recently played, and loved, the Monkey Island ports on the iPhone. In general the pacing is perfect for mobile gaming, and I am strongly hoping that they port Day of the Tentacle next!

However there was one area where the port to iPhone fell down, and became a usability nightmare. A main theme in Monkey Island 2 is swapping books at the library to solve puzzles, and the books are found using the card catalogue. The card catalogue is a collection of draws, as can be seen in the background here: 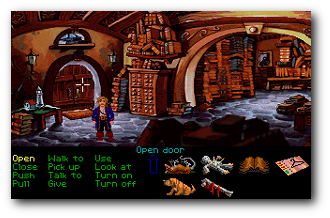 Note this picture is from the classic PC version

Each draw has lots of cards in, as pictured below. There are 207 cards in total in the catalogue. 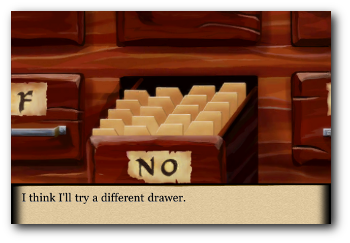 And around 20 cards in each draw

You poke each card to read it, which can then be swapped for the correct book. The problem? First of all I thought there were only 5 cards in each draw, since that is the number of rows I could see – not realising that each tab was a different card. When I figured that out, the impossibility of the task became obvious.

The iPhone screen is only 5cm wide and 7cm tall. Each of those tabs can only be a few millimetres wide. I don’t have fat sausage fingers with hamburger hands, but I still found it incredibly difficult to select the right tab by poking my iPhone screen (remember the iPhone doesn’t have a stylus, which would be more suited to this type of interaction!).

This made the card catalogue puzzle a lot more difficult than intended, and difficult in the wrong way – surely not the developers aim. A method of cycling through the cards would improve the interaction here, or a large ‘hit space’ for each card. As it stands, the interaction is a legacy from when the game was mouse driven, and doesn’t work.

The only other problem I had with Monkey Island 2 was that I didn’t remember the game at all – apart from the ending! Doh! Amazing game though.