Jenifer Tidwell’s book aims to not only help you make the right design decisions when creating an interface such as a webpage or application, but also aims to justify why you’ve made the right choices! Designing Interfaces takes the idea of a sourcebook, with a variety of design solutions at your fingertips, but expands this into a method of thinking about the user.

The book is a collection of design best practices, like so many sourcebooks before it. But Tidwell expands upon this idea, and makes it more than just a sourcebook of design patterns – she also makes important steps in justifying why these patterns are the correct choices with users, as you will see.

Each section is comprised of a list of potential alternative designs for an interface (for example, various ways of having navigation, or a homepage, or a control panel). For each potential design, Tidwell goes through and covers the important questions that you would need to consider – what it is, when to use it, why use it, and how to implement it. This is then followed with interesting examples, linking the abstract concept with relevant examples you will recognise, such as Google or popular news sites.

The book also includes guides on how to do page layout, and alignment correctly and how to display rich and complex data meaningfully, making it a useful guide for most web-based design problems.

Even more interesting is the chapter Tidwell includes on social media. As a emerging field, it is often an area that companies often do not know how to handle, with disastrous results: 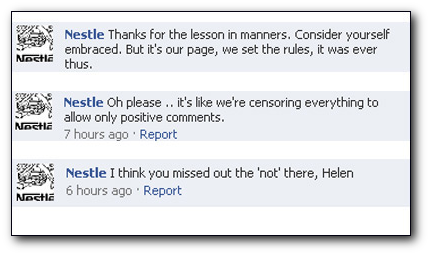 How not to do social media...

The first instruction in the chapter on social media is to “listen”. How often have companies failed to grasp this, and used twitter/facebook as a one way channel? Hopefully this mistake is being seen less and less, with individuals and companies using social media as a method to share information in both directions, rather than just another advertising space.

And what of User Experience?

Early on in this book, it makes great leaps in establishing why we are designing for users, how their perspectives can differ from the designers, and how to aid them in completing their goals, not just meeting the ‘features’ they request.

Although the chapter is brief, it does attempt to cover the basic of user testing, observation, surveys and personas in a few paragraphs. Most importantly this chapter is first – the right place for engaging users in the design process! A criticism would be that this section could be fleshed out more, since it only covers the basics, however it’s fair to admit that this isn’t the focus of the book, and praise it for justifying design decisions in user research at all!

An interesting point raised in the book is the idea of creating behaviour patterns, through generalising how people act and designing for those behaviours. As a quick design tool, this is much better than a typical ‘design’s-vision’ approach that many websites will employ.

In summary, Designing Interfaces proves to be a useful design resource for anyone tasked with created a webpage, or application. It shows positive steps forward in the field, by taking user input seriously, and hence is highly recommended!